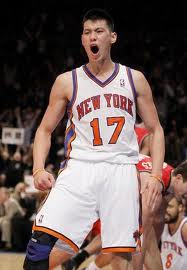 As stories go, Jeremy Lin’s is an astounding one.

They say it takes 10-15 years to become an overnight sensation. To call this story such would be a disrespect to all the hard work this guy has put in over the years. Nevertheless where did he come from?

Quick background: born in Los Angeles, California, Lin was an All-State basketball player and player of the year in high school. He wasn’t very highly recruited despit stellar numbers from the point guard position and leading his team to a (32-1) record and division title his senior season. He went on to play for Harvard and all he did there was continue to perform. He averaged 16 points, four assists, and four rebounds out of college and made the conferences first-team two years and was second team as a freshman.

So how does he go undrafted?

I have a hunch and many aren’t going to agree with it. To me when looking at Lin’s game it is solid. He has proven at every level of his sport that he is capable of averaging 16 points, four rebounds, and six to eight assists per game. My hunch is that because of the mad dash to look at the “can’t miss kids” all the time teams are missing out on some really smart, solid basketball players. The Knicks were fortunate because they had, of all people, Carmelo Anthony chirping in D’Antoni’s ear begging to give Lin, who was essentially living on 10-day contracts his whole career, a shot. Players like Lin are hungry for success which is why this is such a great story. He has worked hard and just continued to do what he has done his whole career from high school to professional basketball: play good basketball.

When Kobe made waves last week for downplaying (be it intentionally or not) Lin’s recent run of success it was taken in stride by the guard who went out and dropped 38 points on the Los Angeles Lakers. When asked after the game if he thought Bryant now knows who he is Lin played cool before responding “he helped me up off the floor so maybe he knows me from that.” Even versed in how to swoon the media.

A rundown of the Knicks point guard situation since John Starks hasn’t been a great one. From Stephon Marbury, to Nate Robinson, to trading away Raymond Felton, to trading FOR Baron Davis. It has been constant in trying to find stability at the position and it got so bad people started wondering if D’Antoni’s system could work in the NBA anymore. What’s more is there are at least a dozen teams in the NBA right now who would take Lin’s career track record let alone the 28 points and eight assists he’s averaging right now. For a position that is so crucial to the success of a franchise these days if he keeps up even at his track records pace he will be better than almost half the league.

I, for one, am enjoying the story and hope for sustained success. As stated before, this kind of thing may appear to happen overnight but he has been working at this his whole life and finally it is paying off for him at age 23. Kudos to Lin for making the most of his opportunity and running with it. To do it in, of all places, New York City has to make this even more special.