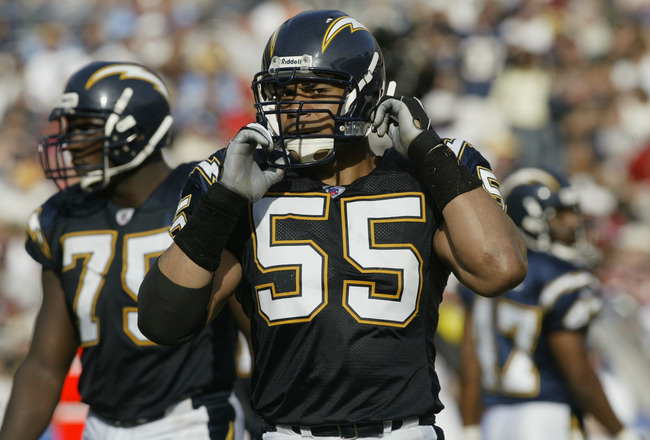 I remember as a sixth grader wearing his shoes.

I’m not talking about Michael Jordan, I’m talking about Junior Seau. I remember thinking, even as a kid growing up in Georgia and him making his name in the state of California, how fascinating an athlete he was.

For 20 years he was the definition of offensive disruption. And when his career was over there he was, according to NFL reference, ranked between Roger Staubach and Michael Strahan and two spots away from Brett Favre?

He was more than numbers, he was an anchor. For a team, a league, a community and a region (in football sense). He played the majority of his career in Southern California first in high school (Oceanside), then college (USC Trojans), and then in the NFL (San Diego Chargers). He was the NFL’s version of Tony Gwynn for that area and he was the kind of person described as a “warm soul” with nothing but “respect for the game” and the people around it. Those people included staff, game day crews, and, most importantly, the fans. Those familiar with the Polynesian culture won’t be surprised by that description at all.

Which is why it was all the more sad to hear that on May 2, 2012 his life came to an end in an apparent suicide. While the details are still coming, it appears that it may be related to the constant head trauma of the same illustrious career for which we knew him.

For 20 years while we praised and lauded this man for his unbelievable and (soon to be) Hall of Fame talent a silent unseen force was playing its part on him. It didn’t do the “Seau Punch” or any other celebratory dance as it slowly took him to the point of no return  last Wednesday.

Others have died before him in a similar fashion. Sadly each with the same result:

An athlete dying too soon followed by a conversation on how we can fix it.

I’m neither an expert on head trauma or football safety. I barely claim to be knowledgeable on many of the things I write about on this blog. I will say that the little boy back in 1995 who bought those shoes in admiration of a man who played across the country from him gets sad every time an athlete (or anyone else for that matter) is gone too soon. Every time I hear it I’m inclined to think like everyone else and wonder what could anyone have done to avoid this.

There is much to be said regarding the games violent nature and yet not much of it is being said. I do enjoy the game of football immensely. I don’t enjoy this side of the coin and can’t accept that as “part of the game.” Like many of us, they should be granted the same security and safety we are allowed at our places of employment on the football field. I know what kind of game football is, but that doesn’t mean it has to be barbaric.

Here’s hoping that the NFL continues its crusade to make the game safer so that these remarkable athletes are able to walk away better than they currently are. Lets not only use Junior Seau’s recent passing as an example, but also the deaths of Dave Duerson, Ray Easterling, and Andre Waters.

These reminders, and many more still living today, should be the wake-up call the league and its governing bodies need to do something. Because even though I’m left with memories of shoes and replays of a great athlete, his children have an even bigger void to fill.