Edward Aschoff of ESPN joined me on this week’s show to discuss college football, his move from the South to Los Angeles, how he would tackle some of the NCAA’s biggest problems, the differences between fans in the South vs. everywhere else in the nation, and what is the best tailgate experience in college sports.  END_OF_DOCUMENT_TOKEN_TO_BE_REPLACED

So much for the good feelings.

Urban Meyer, the newly minted head coach of the Ohio State Buckeyes, made headlines for more than just being Urban Meyer. It has been reported that Wisconsin head coach, Bret Bielema, was less than impressed about some of Meyer’s recruiting practices that differ from the longstanding tradition of recruiting for the conference. From SB Nation:

“One issue Bielema would talk about — and it’s perfectly legal under current NCAA rules — is Meyer’s recruitment of players who already had given verbal commitments to other Big Ten schools. It has been a longstanding “gentlemen’s agreement” in the league that coaches wouldn’t recruit players who had publicly given commitments to schools.”

It sounds to me that longstanding rule only served the best interests of Universities who had something to sell. I have no problem with what Meyer is doing because as Bielema said “it’s perfectly legal under current NCAA rules..” The ultimate goal is building a championship program and that really should be all other coaches care about.

Too much stock shouldn’t be put on this. Just sounds like a few coaches who have issues working a little harder. If anything Meyer should be a wake up call to them and their programs. They only have to look at his fingers to see what is actually working in college football these days. 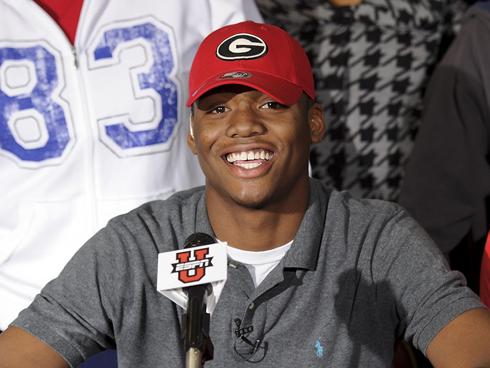 National signing day is supposed to be the culmination of four-years of hard work by a prep athlete getting validated by an offer from some of the finest institutions in the nation.

That was not the case for University of Georgia signee Josh Harvey-Clemons.

Harvey-Clemons (ESPN150 #17/Lowndes High School, Valdosta, GA) was the number one outside linebacker recruit in the country and the number one recruit in Georgia. He was pretty tight-lipped about his commitment status until 2 p.m. yesterday when he announced on ESPN. What everyone didn’t expect was his choice: Georgia.

That set off a chain of events that were as inexplicable as they were confusing.

You see Harvey-Clemons legal guardians are his grandparents and in order for the deal to be official he needed both grandparents signatures on the letter of intent (LOI). Problem is his grandfather, Woodrow, went missing right after the announcement. The interesting part is he  meant to do so.

You see his grandfather decided to take this kids opportunity and make it about himself and his desires rather than what his five-star grandson wanted which was to play in Athens. Because of proximity he didn’t like the idea of Georgia because it was two hours further for a drive. So we’re talking about giving up a chance to play for a great program and a coach who coaches who know how to get their guys ready for that next level for two hours and the wishes of someone who didn’t tackle a soul the last four years (although as a bail bondsmen I could be wrong on that second fact).

Listen, family is family, but understanding that when a kid makes a decision that he feels is best for him and his future in life (be it in football or otherwise) I think that should be understood. Especially considering the myriad other things he could be doing instead of the right thing.

it is unfortunate that his day will be marred by the actions of an overbearing guardian but I wish him all the best from here on out. Lets just hope this isn’t a precursor of things to come and its a smooth ride from here on out.