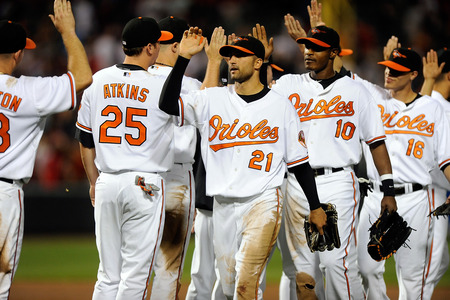 The  capital didn’t get a baseball team because of a hunch by the league when the Expos were searching for a new home. They got a team because someone recognized the untapped potential of that market. A market left dormant, since 1997 by a franchise that once epitomized how things were done in baseball.

Since 1997, the Baltimore Orioles have been anything but a model of success. They’ve finished fourth or fifth in 13 of the last 14 seasons (finished third in 2004), and haven’t had a winning season in any of them. Managerial transitions used to be smooth and infrequent. From Paul Richards to Billy Hitchcock to Hank Bauer to Earl Weaver etc. Since 1997 they’ve had nine different managers try to recapture what was once a given. Couple that with the return of NFL football to the same city, and the Orioles were the forgotten franchise.

In 2010 something changed for this franchise that brought a glimmer of new life for them.

First came the late season arrival of manager Buck Showalter. Showalter, mind you, is one of the games best managers because of his attention to detail and keen eye for talent. He’s also a manager that gets the most out of his players because he demands that respect.

Dan Duquette, who was an executive in the Montreal Expos and Boston Red Sox front office, joined the franchise in November of 2011. A move that shouldn’t go unnoticed because to his credit he has built some of the best teams (1994 Expos and 2004 Red Sox) over the past two decades.

So with a revamped management what of the team?

Any conversation about the Orioles talent generally starts with Adam Jones, Nick Markakis and Matt Wieters. Jones, acquired in the trade that sent Eric Bedard to Seattle, is an exciting young player and has the ability to win games in the field (Rawlings Gold Glover in 2009) and at the plate (25 HR, 83 RBI, and .280 BA). At 26, last year Jones seemed to be showing what we  Baltimore hopes to see as he enters his prime years with the ball club.

What they don’t hope continues is his trend of not getting on base often enough. Since arriving in Baltimore he’s compiled just a .322 OBP and has 111 walks to 433 strikeouts. That’s a troubling sign because if the discipline isn’t there now it could stunt his numbers during peak years.

Matt Wieters finally showed some of the promise he was expected to exhibit right out of Georgia Tech. Dubbed “the next Teixeira,” he finally put together a season that showed he might be ready to deliver. He made the All-Star team last season and coupled that with a Gold Glove award. Like Jones, however, he too doesn’t exhibit the patience at the plate to be considered truly elite. Good player, but not one you hang your franchise on.

That has been the problem for these Orioles since Cal Ripken, Jr. retired back in 2001. They need someone of impact to couple these young guys with and they just haven’t been able to lure that type of player to Camden Yards. That type of player gives a franchise an identity.

I wish I could say things were different on the mound.

Zach Britton showed promise last year in Spring Training and in the first month of the season. Enough promise to where I even went out on a limb and stated he was worth an early roster spot in Fantasy Baseball. I’ll try not to make that mistake again, as he went south dramatically and this spring has been battling an injured shoulder that has slowed his preparation to the point he will start the season on the 15-day DL. Outside of Britton (who I still see as the most talented of the bunch) the rotation is filled out with a group that could only be considered a collection of fourth starters at best on any other team. Backed up by a bullpen that includes not one (Lindstrom), not two (Kevin Gregg), not three (Jim Johnson), but four (Luis Ayala) former closers and you have the makings of an adventure on the hill.

The good citizens in Baltimore can take solace in the fact that they still have one of the most beautiful ballparks in baseball, a manager who is competent, and these sweet new vintage/throwback uniforms. Outside of that, I don’t see much going for Baltimore in 2012. Aside from the aforementioned Markakis, Wieters, and Jones, of which the latter two have some improving to do yet, the Orioles have a host of personnel issues on the field:

Identity starts from the top. It is still relatively early in the Showalter/Duquette regime and there is much work left to be done. While I can usually find a silver lining to send you off, that last sentence was about as shiny as it gets.