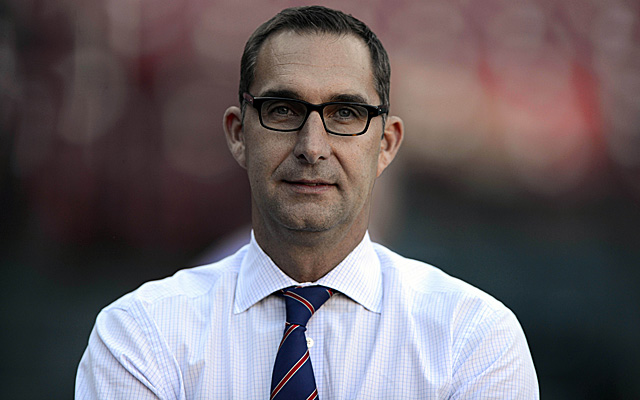 My, how the narrative changes.

I got a text from a buddy of mine a couple of nights ago who is about as adamant a St. Louis Cardinals fan as you’ll find. Given the fact that I’ve been consumed by my pursuit to get into a grad school (I like to keep you posted on my life here in the Locker) I didn’t have too much information on the subject of the text. His question was about the St. Louis Cardinals signing Jhonny Peralta to a four-year, $53 million dollar contract to be their shortstop. It took me a while to gather my thoughts about this considering as a baseball move, it makes complete sense.

The Cardinals needed production from the shortstop position. Don’t let the media types fool you, Pete Kozma (defensive issues in the World Series aside) is an above-average defensive player. In fact as far as shortstops go Kozma ranked ninth in Total Zone Runs Saved (9), second in fielding percentage (.984), and The Fielding Bible (one of the more comprehensive looks into a players worth on the defensive side) published a graphic in July of just how much his defense meant in the Cards’ everyday lineup in 2013.

Adding Peralta, a two-time All-Star and career .268/.330/.457 (BA/OBP/SLG) hitter is an instant upgrade over Kozma’s .232/.293/.315 hash line. In fact under normal circumstances I would call a deal to upgrade offensively at a position for a team without completely sacrificing defense (although Peralta in the field isn’t Kozma) a great thing. But these aren’t normal circumstances, and this isn’t an upgrade as much as it is a loss of what your organization is all about.

I’m not a sports moralist by any stretch of the imagination. I appreciate what athletes do on the field and try not to allow off the field issues cloud my judgement, but that goes out of the window when those off the field issues impact your on the field performance. In this case Peralta, who missed 50 games due to suspension related to PED use, just got paid a whole lot of money. This isn’t a “retribution” case or someone simply getting a second chance. Peralta cheated, got a slap on his wrist, and now the team that prides itself on doing the right thing just sold their values because they needed “better production” at the position. Because, apparently, it doesn’t matter that with PED use you cheat others out of a possible spot in the major leagues. Because what Major League Baseball is telling us is this is adequate punishment. Miss more than a quarter of the season, get paid in the offseason that follows.

Not a system that encourages good behavior.

Questions arise when this sort of thing happens. They did when Melky Cabrera signed, or Alex Rodriguez does what he does; and they inevitably will when Nelson Cruz and others sit at the negotiating table. When will Major League Baseball adequately punish cheaters? Are they as serious as they want to appear? Does the Peralta signing really signify that cheating pays? I’m not going to pretend to have the answers to any of those questions. I have an opinion, and that opinion tells me that this signing isn’t a good. it also tells me that baseball hasn’t gotten it yet. Like replay before it, the powers that be don’t seem to understand that something has got to give. Players who are doing things the right way are beginning to feel cheated, and they are vocalizing it. Publicly. Baseball is looked at, in some circles, as Olympic sprinting in that no one knows who is clean and who isn’t. Is what I’m seeing real or artificially produced through methods that aren’t allowed? A near $8 billion dollar business, baseball, needs to understand these are real problems among more than just fans. Especially when that much money is involved.

Which brings us back to St. Louis. A franchise that, if any, should want to distance itself from PED situations since McGwire retired chirped throughout October about doing things “the right way” or “the Cardinal way”. You heard narrative, after narrative, after narrative about them and their “way” and with their track record it can’t be argued. but with this signing, it can be disagreed with.

So to answer my friends question I say I don’t think this signing was one worthy of the Cardinals. Not with Asdrubal Cabrera of the Indians on the Trading Block. Not with Oscar Mercado in your farm system. And not when you’ve got the intellect to do things a better way, a lot better than this. Mike Bauman of MLB.com wrote that the “Cardinal Way” seems to be the right way  and Adam Wainwright suggested they “maybe start selling books”.

If this is any indication of your new direction, rewarding $53 million dollars to a guy who cheated others out of a job, then you’ve lost more than a buyer, you’ve lost your “way”.