This is going to be an obvious slight to Eli Manning and the New York Giants.

I don’t mind though. Because in the last 24 hours I’ve witnessed one of the worst All-Star snubs in sports and I can’t let it go unnoticed. How does the National Football League (and fans for that matter) justify leaving Matthew Stafford out of this years Pro Bowl? Say what you will about the game not meaning anything it is still an honor; and that Stafford has to wait another year after leading his team to a (10-5) record and the playoffs for the first time since 1999 is ridiculous.

I have nothing against Eli Manning. I liked him at Ole Miss and I have enjoyed watching him in New York. That being said, he doesn’t deserve to be in the Pro Bowl this year. A reaction most casual fans have is “well I’m sure he will get in once one of the other three decides not to go.” That may be true, but that doesn’t excuse him not being chosen for the game. Did I also mention he will probably have to wait for two quarterbacks to drop out of the game? Why? Because Cam Newton is the first alternate.

That doesn’t even scratch the surface.

While both are number one overall picks in their own right Stafford, who has missed considerable time due to injury, has come on to lead the Lions to a playoff berth in his first healthy season. The significance of this is that had he been healthy last year could this have happened before? Stafford has not only garnered my vote as comeback player of the year but he merits serious MVP consideration considering what the award stands for. So all that being said how do you not grant the guy a trip to Hawaii?

All things being equal there are multiple snubs for this years game but few make you jump out of your chair like this one. Hopefully he makes it in somehow, if not I’m sure the Lions are already campaigning for next year. I for one will buy a t-shirt. 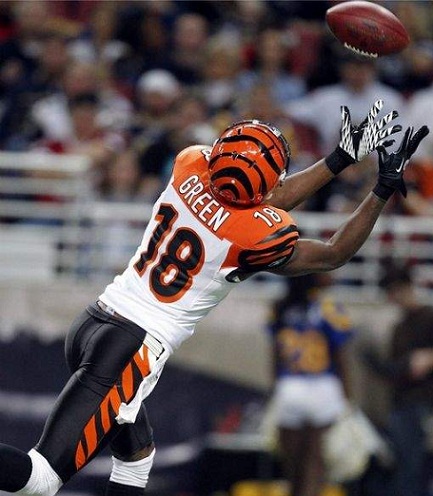 Cheers to Cincinnati Bengals (and former University of Georgia Bulldogs) standout wide receiver A.J. Green for making the Pro Bowl as a rookie. As a Georgia fan I say congrats and Go Dawgs!!