I don’t know what it is about someone telling me “you’re going to lose” or pushing just the right button, but when they do it’s not going to be fun for those who say it.

Hence my aforementioned record last week when I was told to get set for losses in week 7 because of Bye week players.

I get the skepticism, one league saw all but two of my starters on Bye while another saw my team without Aaron Rodgers and staring at a possible 2-5 record and missing the playoffs.

I’m not generally in the conversation of whether or not Fantasy Football (or fantasy sports in general) is a game of skill or chance. I like to think of it as the former: when you play it competitively it’s a lot fun, and takes a lot of knowing what you’re doing. I’m not a know-it-all, but I think those who read me regularly (thanks mom) have read advice like “not marrying names, only production” and “schedules are as important as the draft.” Those things matter if you want to win.

In week 7 my lineup in an ESPN league began the week like this: 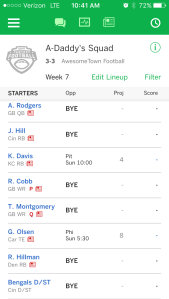 My kicker was the Broncos’ Brandon McManus who was also on Bye. By Thursday here was my de facto ‘B’ team: 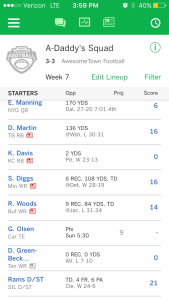 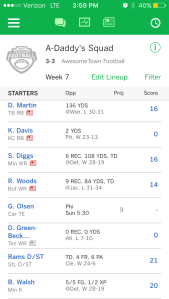 Obviously there were some misses (Green-Beckham, Knile Davis) but some of the hits hit well.

My point: don’t roll over, have fun with your lineup and see what you can make of a tough week by getting into the challenge of outsmarting the detractors.

Who Can You Trust?

For the past two weeks the Miami Dolphins D/ST and skill players have looked like new people and Stefon Diggs has done everything but score more consistently. So what do you do with names like Jarvis Landry, Miami’s D/ST and Diggs? At this point, you play the matchup.

We’re too far into the year to consider someone a “wait and see” player. Diggs looks like the real deal, but Miami faces New England this Sunday. Derek Carr looks like he’s making the leap, but the Jets defense isn’t the San Diego treat they got last Sunday.

What I’m saying is, don’t trust anyone who isn’t an elite proven commodity. If that player making a leap has a great matchup? Good, exploit it. If not then look somewhere else. Just my two cents to a few of the questions I’ve gotten that lead off with the words ‘can I trust….’

Need a defense to stream or consider for the rest of the season? Why not the Vikings? They’re stingy against the run and the pass and with the emergence of linebacker and UCLA product Eric Kendricks the pass rush is about to help a lot of owners score points. They aren’t as well known as flashier units but shouldn’t be overlooked.

If I told you I was considering starting Hoyer over Aaron Rodgers would you listen? While some of you have already stopped listening don’t think it so far-fetched. Rodgers is going up against a Broncos defense that hasn’t been kind to teams in 2015 while Hoyer draws the comfortable matchup of the Tennessee Titans. Hoyer, I’m sure, will be aimlessly cast aside as bigger names come off Bye weeks. Don’t be so sure your week 8 Ace in the hole isn’t Houston’s signal caller.

Take solace in the fact that I practice what I preach, here. I still see big things ahead for DGB and you should too. If you were burned last week by my recommendation I’m sorry, but hang onto or go get this 6’5″ beast of a receiver and know you will be rewarded.

Lockett is an interesting player because a lot of his value is on special teams. But his workload in the passing game seems to be picking up every week. Like DGB he’s a worthy stash; and if you’re in a league that isolates points for return yards then he should have been on your roster yesterday.

An obvious post-Bye week target, I put him here as a stash for his oft-injured receiver mates. Harvin and Watkins aren’t reliable where it counts most: availability. With that, Woods got the opportunity Sunday and ran with it. Keep him as a late season FLEX option and matchup darling for your bench.