We all hope to draft them.

You know who I’m talking about. We want those players who played at such a high level late in the season that they get you so stoked about the next you can barely control your excitement. A breakout player in fantasy football isn’t just a player; he’s a bragging right. An “I told you so” that buys you one to two years of respect, more if you do it consistently. 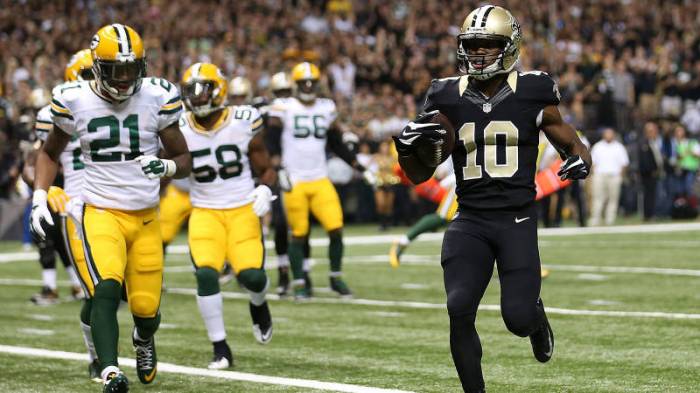 Here’s what I said about Cooks last year:

Darren Sproles and Lance Moore (combined 1,061 yards and 4 touchdowns) have new homes in 2014. Cooks is in line to get about 85% of that production

In the 10 games Cooks played before a thumb injury sidelined him for the rest of the season he had 550 yards and 3 touchdowns. In other words, he was well on his way to achieving that year one. Now, back healthy, and with Jimmy Graham and Kenny Stills out of the picture look for Cooks to be an even bigger part of the offense in 2015.

The focus in Tennessee will no doubt be centered on number two overall pick Marcus Mariota. The most important aspect of the offense, however, could come from the guy drafted four rounds after him.

Cobb, who rushed for over 1,000 yards the last two years at the University of Minnesota, is as under the radar as they come when we talk about rookies who could put up big numbers. He’s landed in the perfect spot to contribute immediately, and has already shown that he’s equally, if not more, talented than incumbent second-year running back Bishop Sankey.

Not all of the numbers for Carr looked spectacular in 2014, but enough did to make me believe the addition of Amari Cooper will give you a solid Quarterback to play weekly in 2015.

Carr’s counting numbers (3,000+ passing yards, 21 touchdowns) were impressive; as was his completion percentage (58%) and overall rating (77%). ESPN’s QBR had him at 39%, which shows he missed a lot of the details of the game per the definition of the statistic. That’s also the stat a lot of analyst will use to deter you from buying Carr in 2015.

Carr has a better coach (Del Rio), a better supporting cast (Cooper, Latavius Murray), and an organization dedicated to building around him and his skills. Better times are ahead for Carr, indeed.

It seems like Tannehill has been in this position for 10 years. Truth is he’s entering his fourth year in the league and has the weapons needed to break out in a big way.

Last year could have been considered a breakout when he threw for over 4,000-yards and 27 touchdowns. I think he’s capable of more. Consider this: From week eight on he completed 70% of his passes for 2,426 yards, 16 touchdowns and an overall rating of 97.

This one might come as a surprise to many, but while others are talking up Travis Kelce and Zach Ertz let me explain why keeping Eifert’s name in that mix could be huge.

For starters, if we’re talking about pure talent then Eifert is right up there with any of the names that are mentioned before his. He comes into his third season with 42 career receptions, 482 yards, and two touchdowns. He’s played 16 games in his career (an obvious red flag) but if Eifert proves healthy (and all reports indicate he is) look for him to finish as a top-5 to top-7 tight end.

Did I miss someone? Follow me on Twitter @DACubbage  to let me know your fantasy football breakout candidates and for more opinions about life, sports, and the art of Wang Chung.